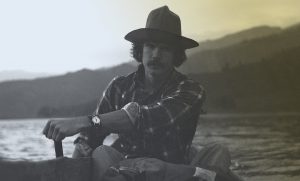 The great trans-Canada highway is a conduit to the Canadian experience, and no one tells its stories with greater intensity than Thorne; self-styled folk singer, raconteur. Weaving the human experience into soft endearing tunes, he creates a rich imagery of Canada’s colourful, storied history. Inspired by the landscape of earth and sky and stone, he sings of the open road; of love; of life. His words ripple, sweep and soar above the Canadian landscape, painting word images as evocative as a Tom Thomson painting.

Born in Ottawa a long time ago this self-styled ‘ordinary man’ grew up in Willowdale, Ontario. Though music was always part of his family tree, (his Grandfather played violin and wrote music for his orchestra, and his father played 8 instruments), his musical interest evolved slowly.

Influenced in his teen years, in the early sixties, he embraced the folk music community, and took up acoustic guitar. Frustrated with the slow progress of learning someone else’s “hard-to-finger” chordings, he slipped into writing his own music at university.

In 1969 he traded tunes with a group of four friends who supported each other’s music, singing under the name “Invitation”.

The 1960’s were adventurous years spent at two colleges and a university, with an excursion to the Middle East in 1968. Married in 1972, to his Finnish wife, Anu, the couple left Canada on a round-the-world adventure that lasted two years 1974-1976. This journey was the beginning of Thorne’s encounter with “Home” and “Heartland”. He bought a twelve-string guitar in England in 1974 and began to write about his feelings for Canada, from afar. The six month stint in a London flat was a prolific time in his songwriting career. He wrote 22 songs between October 19 and December 31/74 including “North of the 49”, “Yukon River Gold”, “A Winter Scene”, “When I’m Far Away From Home”, and “Ontario”.

Thorne takes the ordinary elements of life and touches the truth, in very personal, precise, poignant language. His uniqueness is his quirky ability to use a turn-of-words to expose the essence of what we appreciate in the simplicity of life’s experience: “A windy hymn through twisted pine”, “wind across the water bends the ancient woodland tree”. He speaks with a freshness and pursues honesty with a naivety that brings back the good old days of a past era.

Drawn from memories of his admittedly idealized Canadian childhood, Thorne reminds us of the great past that is found in our embrace of the north. He unabashedly admits his efforts to elevate the Canadian consciousness, through music, to where past accomplishments transcend historical fact to become a flavour of the heart.

Ya Know Ya Wanna Be Canadian!